Hello Lovelies! We hope everyone is doing well and making the most out of these times of being home. With so much uncertainty still, it does tend to get a little stir crazy at times. While we had some sexy times planned for 2020, this year is anything but ‘normal’. With Podcast-A-Palooza (PCAP) pushed until October in Miami, and other events we were hoping to attend were also being canceled. One event that we had planned on going to was the Foam & Glow Party with Club Euphoria in Ohio. They confirmed recently that they had to pull the plug on their events for the rest of the year and that the Foamageddon party in August is now canceled. This was a bummer, but we understand why, and once they explained in more details on their podcast it made even more sense. We were looking forward to attending as the event in 2019 was a lot of fun! We thought we would share our memories from the event last year as a way to smile, keep the positive vibes going and that the event Ray & De will throw next year in 2021 will be worth the wait! While this is from the summer of 2019, we wanted to get this post out much sooner. With our new webpage and other posts it started to slip through the cracks. We felt since there is not the foam party for 2020, it would be fun to share our memories from last year.

Club Euphoria Foam Party – Similar to this, but with less clothes

The Foam Party with Club Euphoria

We knew of the event a couple months ahead of time and knew a few people were going to be in New Orleans for NIN. It was great to meet some people there, knowing we would see them a few weeks later. We had chatted with Ray & De for a couple years and finally met at NIN, and it was great knowing we would be able to attend one of their parties. 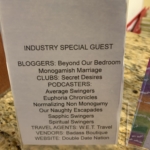 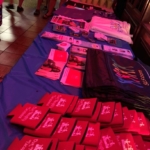 As we headed south from Michigan to Ohio, we listened to Normalizing Non-Monogamy with Finn & Emma and caught up on a couple episodes. We were excited that so many people we knew or had chatted with for so long would be there. We arrived at the hotel excited for a fun evening and meeting new friends and seeing old ones. As we walked in we noticed how nice the hotel was set up, a laid back afternoon party vibe was already happening. The lovely De checked us in and gave us big hugs as we had met at Naughty Nawlins a month earlier but didn’t have a chance to really hang out with them. We had chatted online for well over a year about their events and were trying to determine when our schedule would open to check out one of their events as we had heard good things. After we checked in and said a couple quick hello’s we went into our room to freshen up and make a cocktail and headed down to see everyone. As we approached the lobby area the mix and mingle hour was underway, we noticed two familiar faces waving to us from the distance, and it was Nikki & Bob from Our Naughty Escapades Podcast. We went over and said hi to so many friends we had met at previous events, including the lovely & distinguished Monogamish Marriage blog, the inviting Adam & Eve from Spiritual Swingers who we had seen just a few months prior, and the always in a mood to party Jay & Angie from Average Swingers. We also ran into Finn and Emma from Normalizing Non-Monogamy and told them we had just binged a couple episodes on the way down. It was so nice to finally meet them, as their interviews and stories are great! However, out of the blue, the always smiling duo Tiff & Rachel tackled us with big hugs as we had chatted for years online and we were looking forward to finally meeting. It felt like meeting old friends within minutes. We finally were able to chat with the lovely Dave & Andi from Double Date Nation. We had met briefly at NIN, and even said let’s chat more at the foam party as it was so packed in NIN. While it was so much fun to see old friends and meet new ones, we also met some fun couples from around the area that were regulars with Club Euphoria and also friends that flew into the area from out of State for a fun weekend. 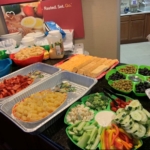 As we chatted and had laughs the event was getting underway. We couldn’t believe how much food the crew had put together. Hats off to Ray & De, but really their crew is 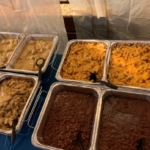 top notch. Very accommodating, and really worked their tails off! As dinner was winding down, Ray & De were having a warm up to the party with drag queens that had the party off to a great start! We all had some laughs and a fun time. Before we knew it, Ray was being made fun of (in a good way) from the special guests. Ray is one to sacrifice himself in the name of art and fun for all of our enjoyment!

We went upstairs to change into our shorts and bikini for the foam party. In all of 10 minutes we came down and the foam pit was packed! Mrs. Swanilla quickly lost her top and we were dancing in the foam pit with Finn & Emma, Tiff and Rachel and so many friends. Finn won the award for longest dance under the foam machine and was covered in suds the entire time! Bob won the award for funniest moment as he rejoined the foam pit and was running towards everyone and hit the dip and completely wiped out in the foam. But Jay from Average Swingers was right there in his shark outfit to go search for him and ensure he was safe! So many of us saw that and laughed for days. Bob you know you are great!!!! De was awesome working the foam spray gun and is a great host! It was great when De & Mrs. Swanilla were dancing near the DJ booth in the foam pit and both had their booties just shaking and shaking! Ray is really an awesome DJ and had a great mix of music playing. As the music was jamming, people were having fun, we noticed a very attractive couple dancing and having fun, but somewhat on the side of the area. Mrs. Swanilla whispered “I think they are shy or maybe a new couple, let’s go invite them to dance with all of us”. As we approached them, they had disappeared to the pool area. Perhaps a missed opportunity? They were a very cute couple!

After a long time in the foam pit, we went into the pool area to rinse off and relax. Many people had gone to their rooms for fun or to the large playroom. We went to check out the playroom but the mood hadn’t struck yet. We ended up chatting with Dave & Andi from Double Date Nation and really learned a lot about their site, web design and more. We chatted about blogging, hosting (real sexy stuff)! Finn and Emma also joined us and another couple, and we all had just a nice conversation about Double Date Nation, the various platforms and just more on the lifestyle in general. As we were talking, we noticed some commotion down the hall, and Jay from Average Swingers runs by real fast without a word to any of us (and we all know him). Minutes later, he comes walking back fast, escorting another friend who was ‘needed’ in a room to join the fun that was being had. No words exchanged, just a lot of smiles. Jay & Angie explained it in more detail on their podcast on Episode 125 when they interviewed Dave & Andi. The story is priceless, and is sure to make you laugh! 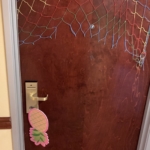 Every room had an upside down pineapple

The way the entire party was set up, from the foam tent outside with plenty of privacy barriers, to the huge amount of BBQ the crew prepared for everyone, to decorations all over the hotel and the crew from Club Euphoria for not just decorating the hotel, but having small gifts and giveaways in each room was such a nice touch. We partied into the night with many new friends and made some great memories. We are bummed there won’t be one in 2020 due to the state of the world. But as we told Ray & De, it will make 2021 that much more special. Life is too short to not have fun!

As we woke up in the morning and got ready to leave, we ran into De in the lobby running around like crazy cleaning up from the party. We gave her hugs and told her what a great time we had and to give Ray our best. Such great people and happy to consider them friends, even if we don’t see them often. As we headed home, we found a great little place for brunch to soak up our fun from the night before. As we sat there in this little restaurant, smiling, having our coffee and just whispering to each other how much fun we had last night. With no one around having a clue what had happened just down the street just hours earlier.