We are happy to be back and are loving our new site! We hope you are too and please sign up for our newsletter if you would like to stay up to date on our sexy journey. We promise not to spam! Just sexy stories, reviews and updates on our journey in the lifestyle. Our sexy friends Dave & Andi at Double Date Nation really helped us out with their expertise in web design, and a lot of behind the scenes stuff to make our new site so much more functional and sexy!

Now that we are back we are happy to share our stories that have been ready to be released for some time. We know it’s been a few months since our trip and review of our first time at Naughty N’awlins also known as NIN. If there is one word to describe NIN for us it would be ‘crazy’. The second word would be ‘overwhelming’. We approached our first trip to NIN with an open mind and had the idea of trying something new. We have always wanted to see New Orleans and had never been to the city. We had a bucket list in mind on a few things we wanted to see or experience from just the city perspective. But also approached the entire trip with an open mind and that we would not see everything we wanted to see both in the city and in the event of NIN itself. We knew we couldn’t do it all in one trip. We knew not to compare it to a resort like Desire. We knew that the event itself has a nonstop party reputation and that is true!

To start at the beginning of our trip, we had several things going on in our daily life that made it hard to transition from “mom & dad brain” or “work brain” to our sexy brain and mindset on a sexy vacation. Looking back we should have pushed pause on some home life things the weekend before and just relaxed to start to build up to our sexy trip. We ended up packing very last minute and were up very late before our morning flight to New Orleans. We ended up starting our trip with about 4 hours sleep each. Not the best way to start any vacation, but to start your first time to New Orleans and one of the largest lifestyle events in the nation made it challenging. 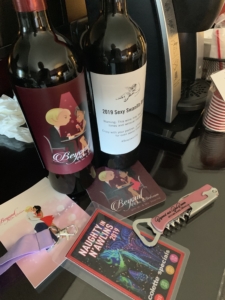 We arrived at Detroit metro airport and met our friends from New York. They had to make a connection on the way to New Orleans and let us know ahead of time they would be connecting in Detroit on the same flight as us to New Orleans. It was great to see them and have coffee with them while we waited for our flight. One of the fun parts of our flight to New Orleans was between the four of us we were playing the game “who else is in the lifestyle?” or “who is going to NIN?” We were towards the end of the boarding process but we spotted a few couples that perhaps had the look or vibe going. We didn’t realize that a large segment of the passengers were made up of Herbalife employees. We did notice a couple in the row next to us that were ready to party and our friends were sitting behind them. We all knew they had the look, but weren’t sure if they were part of NIN. During drink service it was crystal clear as the guy was openly hitting on the flight attendant and it was very obvious. We found out weeks later that the Swingin’ Around podcast (also from Michigan) were on the same flight as us, but we didn’t realize it or see them the entire trip.

Before we knew it, we were arriving at the hotel and checked in at the hotel. Just a few people in front of us was the couple from our flight. We called it and smiled while in line. As we were standing in line to check in, Jay & Angie from Average Swingers come running up with hugs and high fives. We had never met them before but had chatted for years online. It was great meeting them and they are 100% the same in person as they are on their podcast and in the twittersphere. Once we were in our room and settled we decided to go to lunch with our friends. We found a fun place just down the street from the hotel. As we walked in, we ran into 4-5 couples and all recognized each other from chatting on a couple of platforms ahead of time. It was great meeting everyone and finally connecting after months of fun conversations leading up to NIN.  After lunch we all walked around for a bit and hit the local store to stock up on drinks and mixers for our room. We were in need of a nap and shower at this point, knowing we had a long night.

We knew that we would not be participating in the parade and had hesitations on even watching from the street, mainly for privacy reasons. So we headed over to the House of Blues as Mr. & Mrs. Jones from We Gotta Thing podcast set up a meet and greet. While not an official NIN event, the turnout was great and as we walked in we ran into Penn & Paige from Swinger Diaries who made us feel right at home. We turned around and ran into the couples from lunch time. Within a couple minutes we were chatting with Ray & Dee from Club Euphoria, Tori & Soul from the Torrid Souls Podcast, and fellow bloggers The Monogamish Marriage. We had chatted with all of them online for so long that it felt like meeting old friends. As we were chatting with other couples who were also attending NIN for the first time, Mr. Jones walked over and we finally were able to introduce ourselves and chat for a few minutes. Mrs. Jones was chatting across the patio so we weren’t able to say hello. 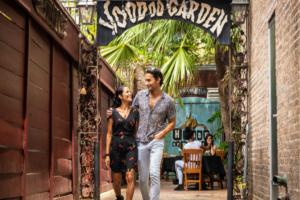 Such a fun place filled with sexy couples

It was such a great setting on the patio to be around so many sexy and like minded couples. Just chatting and learning about others stories while having a cocktail in the shade was such a fun time. It was the perfect way to start the event and get to know some couples. After about an hour or so we headed back to our hotel to freshen up and grab dinner. The parade was just ending and we watched the parade end in front the main hotel. It was a lot of fun, music, dancing, cheering and we both got caught up in the moment and were having fun cheering everyone on. Within a few minutes we realized there were a lot of tourists that weren’t part of this scene taking pics/videos and we both ducked into to lobby of our hotel to hide and catch our breath. There was another couple in the entrance that we chatted with. Within a minute the couple saw our lanyards/badges and said “Hey, you guys are Mr. & Mrs. Swanilla from Beyond Our Bedroom! We are The Bomber and the Belle from the Black and Kinky Podcast ” We all laughed and hugged realizing we had chatted before and heard their podcast but didn’t realize it was them. We retreated to our room to freshen up and head down the street for dinner at the Bourbon House. As we sit down and are looking over the menu we realized that The Bomber and Belle were being seated just a couple tables away from us with some of their friends. We toasted to them and all shared smiles.

We returned to our room and started to get ready for the first theme night – EDM night and we were excited to dance, flirt and play. We went to the main dance area and it was a great scene. The way the two dance areas were set up, they had a couple different options with different music styles. We danced and flirted with others on the dance floor. We had missed the earlier tour of the play rooms but decided to check it out. We were curious what the rooms were like. Knowing there were massive conference rooms that were converted into sexy play areas we weren’t sure what to expect. We changed into a towels and robes and slowly walked the playrooms. There were so many options to choose from. The main playroom with several beds that had a wild element to it. The soft white lights room that was classy. The 100% dark room where you can touch/be touched without knowing who or what was happening (not for us). The bondage type room. The single guys room where there are several single guys waiting nearby to greet couples as they entered the room. We saw many couples partaking in MFM in this room and also ladies enjoying play in this room with a new friend. While this room wasn’t for us, the guys that greeted us all were very polite and respectful. Then there was the smaller, purple style room. It took us awhile to slowly walk the rooms to take it all in and see what type of room appealed to us. We ended up having a lot of fun that night. What a way to end Day 1 at NIN.

Up next Day 2 – another meet and greet, new friends and Blue Night.