Home/Giving each other and yourself permission to play…
Previous Next 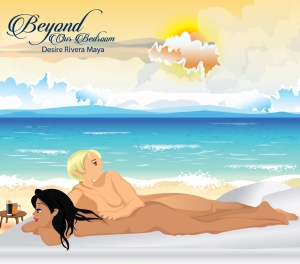 After a spending a sexy day at the beach and just taking cat naps on the beach beds we went to the hot tub to see some friends. Time really does fly in the hot tub, as you may think you have been in the hot tub for twenty minutes, and you look up and the sun is setting and realize you have been there for two hours! We decided to head back to our room to get cleaned up for dinner and have some sexy time together. On our way back to our room we saw a couple we had chatted with at the lounge the night before. They asked us if we would like to join them for dinner. They mentioned that they were staying in one of the new villa’s and had a private dinner set up and we were welcome to join them. We gladly accepted and went back to our room to shower and get ready for the night.

We joined them for a dinner a short time later and the villas are truly amazing and they look great! They gave us a tour of their villa and how the plunge pool goes right up their door. What’s funny is little did we know what would be happening outside their door later that night! We spent the next couple hours enjoying a full course dinner being delivered to their room with each new dish coming every 15-20 minutes. We enjoyed spending time with them and learning their story. They were a very easy couple to talk to and get to know. They felt like old friends by the end of the night. We talked about so many things, from our careers, family life, and how we all have approached the lifestyle and trips like Desire. It was a truly a nice time and we hope our paths cross again.

A party in the villa with our sexy Mexican friends

While in the disco we were hanging with our friends from Michigan we met a day earlier. It was getting to that point when the dance floor was starting to clear out somewhat as people went to the playroom, the hot tub or back to their rooms. We ran into some mutual friends who were there from Mexico. They too also mentioned they were staying in the new villas and were having an after party and invited the four of us over to the after party. So after a few minutes of talking the four of us decided to head over to the party. The new villas are truly amazing and there is a lot of room to party. We arrived to see our new friend who invited us over. There were four other couples all traveling together from another part of Mexico all naked in the large plunge pool or making drinks at the bar. The four of us all had our club clothes on still, whereas our new Mexican friends all were naked in the pool. After a few minutes of feeling out the vibe, they asked us if we were coming in and wanted to join them. I went to the restroom for a minute to freshen up, and hear this loud cheering. I am come out and see Mrs. Swanilla naked in the pool with a drink in her hand. I didn’t think twice and of course got undressed and joined her within seconds. There was a lot of flirting in between all of us chatting and getting to know each other. It was about this time that our new friends from Michigan decided to call it a night and headed back to their room.

Our new friend who invited us to the party was a big flirt and we kept ending up in the same general area of the pool. We shared a few kisses. She made out with Mrs. Swanilla, then made out with me. Then Mrs. Swanilla and I made out with her together. There were several people in the pool now and just a couple villas over someone noticed a couple having sex on the second floor in clear view. So many of the people were swimming down to see who it was as we were curious if we would recognize them.

As everyone swam down to watch the show and cheer this couple on, I stayed in the area I was in prior to this with our new Mexican friend. Things were starting to heat up between our new friend and myself. We weren’t just flirting anymore and part of me was a little unsure how to relax without Mrs. Swanilla next to me, even though she was just 15-20 feet away having laughs with new friends. As things started to really heat up between us, many of our new friends were swimming/walking by in the pool and I slowly was reaching out to Mrs. Swanilla to get her attention so she knew what I was doing. It was at this moment that things got really hot. Mrs. Swanilla said out loud “Hi baby, it’s okay, just have fun, I am good”. There was something about her saying this to me that was very sexy! It allowed me to have fun with our new friend, and it took a lot of the pressure off. It provided that reassurance that I felt I needed to truly enjoy myself. It was this point that we passed the point of giving each other permission to play, and what we were okay with. It was at this point after I heard what Mrs. Swanilla say that I had to give myself permission to play as well.

At this point I just leaned against the pool wall, while our new friend was wrapped around me, kissing me, and we allowed our hands to explore each others body. After a bit of kissing, touching and rubbing  Mrs. Swanilla made her way over to us where we started to share. I excused myself to freshen up my drink and came back and noticed Mrs. Swanilla had our new friend against the wall having her way with her now. Almost being the dominant one which was new territory for us. It was something that I was more than happy to return to. As Mrs. Swanilla was playing with our new friend, I was getting friendly with a Brazilian unicorn who happened to join the party from her room a few minutes earlier. A few minutes later Mrs. Swanilla and I found ourselves reconnecting with many couples around us. As we were kissing, and touching and looking each other in the eyes we could tell we both were extremely turned on, hot and okay with everything. As we were kissing the mysterious unicorn returned to see us kissing and playing. Mrs. Swanilla started kissing her and playing with her too. I enjoyed the show right in front of me. Our friend had asked her how long we had been together. When Mrs. Swanilla told her how long we had been married, the unicorn was getting super excited and would make out with me, and then Mrs. Swanilla. We had fun basically passing her back and forth between us. The more Mrs. Swanilla told her about how long we had been married, how much we love each other and that we are okay playing she was getting more excited and turned on which lead to more playing. After a short time of playing, I look over and Mrs. Swanilla is making out with another new sexy friend at the other end of the pool.

I found myself back with our original friend having more fun. As we all were enjoying ourselves Mrs. Swanilla joined us and was very turned on and leaned back in the water near the stairs to get into the pool. I got in front of her and started fucking her really hard. She was hanging onto the handrail, while the Mexican couple were on each side of her each sucking on her tits. They also took turns kissing her in between her loud screams. At this point, I was fucking Mrs. Swanilla and our friend leaned over and was kissing me as I fucked Mrs. Swanilla. This went on for quite some time. As we finished up, we joked around that Mrs. Swanilla probably woke up part of the resort with how loud she was screaming. As we started to get out the pool, our friend was leaning on the stairs and she grabbed me for one last kiss. I kissed her goodnight as we knew it had been a long night but had no clue what time it was. We got back to our room and Mrs. Swanilla grabbed her Hitachi Magic Wand got on her knees/stomach and I got behind her as she was grinding her Magic Wand. She was asking me to tell her about our night and what I thought. We proceeded to fuck slowly for a very long time. As we finished after several long, loud and intense orgasms I said “do you know what time it is?” Mrs. Swanilla said 3am? I said its 6am! We saw the sun coming up as we were going to bed after a very long and sexy night. We finally passed out in bed.

We were up within a few hours of going to bed due to the sun shining and cleaning crews making noise around the resort. We were slow to getting around due to lack of sleep. So after breakfast we made our way to a beach bed to take a nap and reconnect with each other. We talked throughout the day to check in with each other and we were more than on the same page, and I had asked her “did you see her kissing me good night on the pool stairs?” She said yes, and I asked her if she saw her grab my cock and slowly rub it on her clit one last time? Mrs. Swanilla said she hadn’t seen it but it turned her on hearing this and other things that happened under the water. She also explained to me that the ladies whispered earlier in the night and our new friends were a soft swap only couple. So this made Mrs. Swanilla excited and turned on that she felt that comfortable with me that she was teasing herself with my cock at the end of the night like that.
We still relive this night several months later with sexy pillow talk, as it really gets us going. It was a night we will remember for a very long time and we had an exciting and intense hot time!

As always you can reach out to us via the comment section, through our webpage or twitter.