Welcome back to part 2 of our time at NIN. We know it may be a distant memory for many of you. But we wanted to be sure to get it out later rather than never.

The trip was packed with so many things to do and you do really have to pace yourself. We woke up after a long first day, first night of partying and seeing old friends and meeting new ones. We got ready and headed over to Saints and Sinners on Bourbon Street for the meet and greet. This was a meet and greet that was part of the NIN schedule of events. There were so many fun couples that had chatted through various social platforms that it was nice to be able to meet in person. The place was absolutely packed at 11am. We were able to see a handful of couples we had met the previous night. We finally were able to meet Cat & Darryl from Swinging Downunder and had a drink. Darryl was just as he is on the podcast and had us cracking up. We also were able to finally meet Taara and James from Sex Uninterrupted. Just a fun couple that we had chatted with for a couple years. It was a lot of fun having a drink and sharing laughs with so many great people. It was a fun time that we saw so many that had fun swag to giveaway, lubes, coasters, drink-ware, sunglasses, shot glasses and more. Once we left the meet and greet we went to have lunch and just relax for a bit and have some alone time. We learned that you really have to pace yourself at NIN in terms of sightseeing, grabbing drinks with friends, bar takeovers, parties, theme nights and enjoying sexy time.

One thing we didn’t realize is how many people were in town for a Herbalife convention. We briefly touched on it in our last blog post, how there were several on our flight to New Orleans. They were all over the streets, restaurants, and in so many other places. There was a funny post on Twitter that Jay from Average Swingers posted. He posed with a few Herbalife peeps and we all joked that they had no idea the audience he was tweeting the photo out to. It was all playful fun. 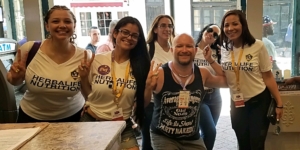 Jay excited to join their team!

We were excited for the evening events as it was blue night. We were having a drink at the hotel lobby with some friends and realized the last bus to the Fillmore about a mile away was leaving shortly. We headed over to the Fillmore and this was a pretty cool venue. Great stage, fun band playing and good drinks. It was cool that there were smaller bars and areas to sneak into that had different music playing and more of a dance vibe and was a little easier to chat with people. This was nice, as it was great to be able to chat with other couples on a quieter level. When chatting with one couple we realized we had made a blunder and there was a miscommunication (on our part). This will certainly be a future blog post in itself. One fun view we had during blue night was seeing two couples get busted for playing in the seating area. It wasn’t just us, we noticed a small crowd gathering in the area. The Fillmore venue is a typical 2,500 seat venue with a main floor, and seating on sides and in the back is elevated. We were able to sit just about anywhere. We noticed several people sitting in the back area. Some enjoying the band. Some chatting with friends. But later in the evening we saw security tell some couples to knock it off and to stop what they were doing.

On Friday we made it a point to attend a workshop that was being hosted by a few podcasters and other professionals in the sexual positive space. The topic was Dealing with Jealousy with your partner. We haven’t had much jealousy in our journey so far, but have had a few things creep up that we had to discuss. It was nothing personal against any other couples or ladies/guys on an individual basis. But we thought it was a good idea to go to hear others stories and learn from a proactive perspective.  Some of the stories that we heard share were very inspiring, touching and a couple times there wasn’t a dry eye in the place. We learned how important it is to not only communicate but also how to approach things in the lifestyle and in other areas of life.

After the seminar, we headed to The Beach bar where the foam party was being held. We arrived and ran into more people we knew from the last couple days and new people we had chatted with but hadn’t yet said hello to.  The place was absolutely packed and it was a really hot day with the sun out and just the vibe was a lot of fun. While running though the foam we made our way to the inside bar area where we saw others we knew. However, while in front of the bar we had to play decoy a couple times. We noticed several people next to us that were taking selfies. This may have been an oversight but as they were taking selfies we were right in the pics so we were bending down and hiding behind them while they snapped pics. This may have been a simple mistake. But with the click of a few buttons that pic may have made its way to various social media platforms. Would people recognize us at a bar with a lot of people? Were people naked in the background behind us? Were there logos from promoters that would be a giveaway if they were seen in the background? Always a good reminder to remember that those around you may not be ‘out’ even if you are. That was one thing that gave us pause, is the lack of discretion in some parties with cameras/phones compared to clubs or resorts where there is more of a communication from the start to not take pics in public areas or at least use good judgement. 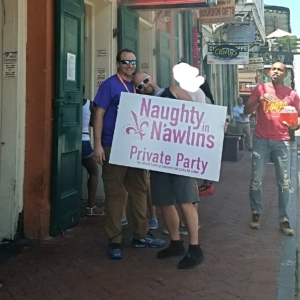 We ended up spending the entire afternoon at the Beach Bar/ Foam Party with several friends. We had new friends join us and partied our asses off for hours. We think we ended up with more waters than cocktails since it was so humid and hot. By the end of the party, we all stumbled out onto the street as we were the last to leave. Darryl proceeded to say hi to everyone in the street and had many tourists laughing. We went back to our room to take a nap and rest up for the night. It was a theme night we weren’t really feeling, so we had a nice dinner out together and then headed to Colette owned by Jackie and John from Open Love 101. We had heard about this club for some time on their podcasts and from others we know. We figured we knew we were in town and wanted to check it out. We went there and were a little confused with the layout. There were a few levels and rooms and a couple rooms looked very sensual. We went to get a drink and forgot it was BYOB, so we were out of luck. We went to the dance floor and didn’t realize how small it was. We were hoping to dance, maybe get a vibe going, and see what happens. It was a slow night so there weren’t that many people there. We may try the club again when we are in the city next time. We would be interested in seeing the differences between the club in New Orleans and the ones in Dallas and Houston.

We ended up back at the main hotel and went to the playrooms and had a very sexy time. One funny moment was, as we enjoyed ourselves there was a sexy couple just a few feet away from us. They whispered that we were sexy and asked if they could lay near us to enjoy the views. We didn’t mind. As they were having fun, we noticed a few things from our view. The guy started yelling out loud to the NIN staff “I NEED LUBE, GIVE ME LUBE” and he jumped up and there was a staff member pumping lube into his hand for him to use. We weren’t sure what to make of it. The fact that they had staff members nearby to assist in a delicate situation was great! But the way he was yelling so loud, we weren’t sure if we should laugh or be concerned. 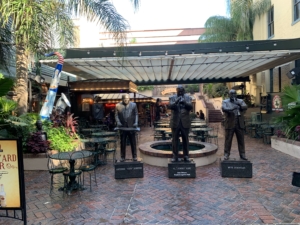 Overall we had a good time at NIN and while we aren’t going back this year, we may go back in the future. We would approach a few things differently from the schedules, events and sightseeing. We like the idea of flying in a day early next time to really get our room set up, go see some sights, and really start the craziness at our own pace. Bob & Tess and their staff really do a great job on everything and it really is something to be proud of what they built.